The Reality of Artificial Intelligence

The market for Artificial Intelligence (AI) continues to pick up speed with a big push from both the major players (including IBM, Microsoft and Google) and a growing number of AI-focused start-ups.

From 6sense (helping the likes of IBM and Cisco to predict sales) through to Arria (extracting information from complex data sources and communicating back in natural language) and Botanic.io (designing and building products that are capable of understanding and responding to human speech), companies are virtually appearing overnight to take the digital world by storm. The major players are snapping them up at speed too, so why is AI suddenly such a big deal?

Whilst we may not be interacting with humanoid robots or travelling in driver-less cars on a daily basis as portrayed in the movies, the fact remains that AI systems are becoming increasingly sophisticated and playing a pivotal role in our lives. Sir Ridley Scott had a ‘face to face’ chat with IBM Watson about the nature of Artificial Intelligence in movies and the real world:

Today, organisations are primarily investing in AI to help them understand what their customers want and need – using speech recognition or analysing behavioural patterns to guide their service delivery. Think about the call you’ve had from your bank in response to ‘suspicious activity on your account’ for example, or the adverts that pop up when you go online that are frighteningly well targeted at you as an individual. AI isn’t something that we necessarily see or are even conscious of, because ordinarily, it takes the form of back-end algorithms that are able to process big data far more quickly and efficiently than is humanly possible.

ChatBots represent one of the most accepted uses of AI today, using deep learning and neural networks to comprehend data sets in the same way as a human brain would. Facebook recently announced plans to enable businesses to deliver automated customer support, online shopping guidance, content and interactive experiences to its users through its Messenger platform, using ChatBots. Google is also set to launch its own ChatBot (Google Search Assistant), which will take any incoming message and make suggestions for replies, links or actions – based on the context of your conversation. Microsoft launched ‘Tay’, only to have to withdraw it for upgrades following a highly sensitive hacking episode that made headline news. This recent blog article from Forbes looks at the current landscape and future potential for ChatBots in more detail.

What can AI do for you?

The IT Insider polled our own followers to find out what is likely to motivate their business to adopt AI: 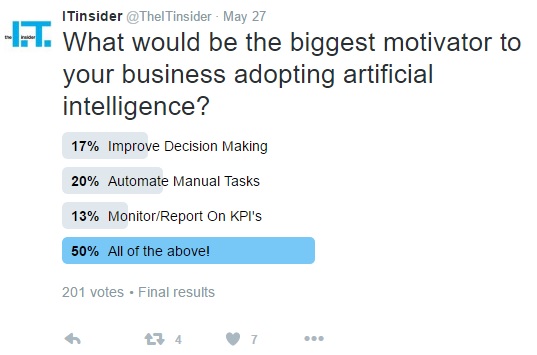 The results suggest that all of the key benefits are widely recognised and with 50% acknowledging that the potential of AI would benefit their business on every level, the future for AI looks rosy.

Take a look at this video from Goldman Sachs which provides an insight into the ‘factory of the future’ – based on a virtual ecosystem, increased collaboration between humans and machines (CoBots) and the rise of real-time collaboration.

And if you still prefer to think of Artificial Intelligence taking on a more visible role in our daily lives, watch this video about ‘Olli’ – a driver-less shuttlebus, powered by IBM Watson:

Where is AI heading?

In Gartner’s report - Top 10 Strategic Predictions for 2015 and Beyond: Digital Business Is Driving 'Big Change' – they made the following predictions for the future of AI in business:

2016: more than $2 billion of online shopping will be performed exclusively by mobile digital assistants

2017: a significant and disruptive digital business will be launched that was originally conceived by a computer